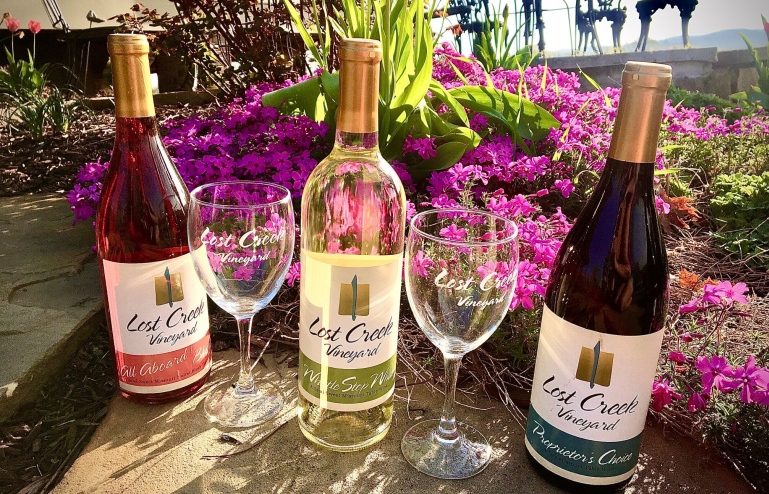 In 1997, Tom and Steve Frichtel, after working for many years in the home building business, were interested in finding a property in Missouri Wine Country.  When they first saw the site, they knew the topography and location (a south-facing slope close to the Missouri River) were perfect for a vineyard.  However, what you see now as Lost Creek Vineyard bears little resemblance to what they saw on that first day.   The grounds were overgrown with scrub bushes and locust trees, and there were several dilapidated out-buildings.  The Winery Building was a “well-used” farmhouse, with a leaky stone basement.  Tom and Steve purchased a used bulldozer and began tearing down the out-buildings, clearing the ground, and putting in a pond.  After about eighteen months, their wives, Chris and Claire, begged them to sell the bulldozer while there were still trees standing.

Then in 1999, Tom and Steve put in the first small vineyard of Chardonel grapes. This involved building a trellis system and eventually putting in an extensive irrigation system.  Growing grapes involves careful cultivation, training, and pruning of the vines.  This was also done mainly by Tom and Steve, until several years later, when Steve’s son Larry, who is now the vineyard and winery manager, came on.  The vineyard continued to expand and there are now over twelve acres of Chardonel and Noiret grapes.

After several years of selling the grapes to local wineries with lots of positive feedback about the fine quality of the grapes, Tom and Steve decided that the next logical step was to sell wine made from their grapes.  So, in 2008 they set about rehabbing the old farmhouse, and with the help of area architects, were able to maintain the original “footprint” and added a spacious wrap-around porch and picnic area.  If you are interested in these kinds of things, be sure to ask to see the pictures of the “lifting” of the house in order to pour a new concrete basement.  In 2011, with all of the improvements in place, they were thrilled to open the winery for your enjoyment.

About the names... Lost Creek Vineyard - there is actually a “Lost Creek” which is the eastern boundary of the property and flows to the river. Whistle Stop Wines… The property is adjacent to the KATY Trail, which was once the bed of the railway tracks of the old Missouri – Kansas – Texas Railway Line, (M-K-T, KATY for short), which ran from approximately the mid- 1800s until it was sold to the Union Pacific Line in the mid- 1900s.  Later, when the trackbed was no longer used for train traffic, it was converted into the Missouri Park Service recreational trail.  Lost Creek Vineyard is just up the hill from the village of Gore, which was a “Whistle Stop” on the KATY line.

The Frichtels are delighted to invite you to enjoy the lovely wine and pleasant, friendly ambiance of Lost Creek Vineyard on your next visit to Missouri Wine Country.